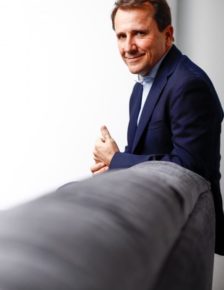 
Thibault Lanxade began his career in the petroleum industry, within international groups such as Shell, and became CEO of Gazinox in 2004. The motor to his entrepreneurial commitment is to promote the growth and innovation of companies in a digital and connected world. In 2009, he moved to the digital sector and created the French Association of Payment and Electronic Money Institutions (AFEPAME), of which he was President until 2012. In 2014, he created two digital companies, including AlgoLinked, an artificial intelligence solution for media relations. The same year, he joined the board of directors of the Jouve-Flatirons group, before becoming CEO in October 2017. In addition to his entrepreneurial journey, Thibault Lanxade has always been involved in collective action serving SMEs. From 2013 to 2018, he was vice-president of Medef in charge of the entrepreneurship, thus a spokesperson for the entrepreneurial spirit in France. Appointed ambassador for profit-sharing and participation in February 2019 by Bruno Le Maire and Muriel Pénicaud, he pursues his mission of defending entrepreneurship by supporting SME managers in sharing value with their employees. He is also president of the support committee of the Clinatec Endowment Fund since early 2019, for which his mission is to develop the circle of patrons to accelerate research and offer new innovative treatments to patients.