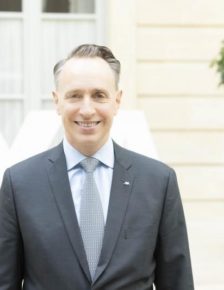 
Thomas Buberl has been Chief Executive Officer and Director of AXA since September 1st, 2016.

He started as a consultant at the Boston Consulting Group for the banking & insurance sector both in Germany and internationally. From 2005 to 2008, he worked for the Winterthur Group (acquired by AXA in 2006) as member of the Management Board of Winterthur in Switzerland, first as Chief Operating Officer and then as Chief Marketing and Distribution Officer. He then joined Zurich Insurance Group as Chief Executive Officer for Switzerland.

At the beginning of 2012, Thomas Buberl joined AXA as Chief Executive Officer of AXA Germany and member of the AXA Executive Committee. In March 2015, he also joined the AXA Management Committee and was appointed Chief Executive Officer of the Global Business Line for the Health Business, and, in January 2016, of the Global Business Line for Life & Savings. From March to September 2016, he was deputy CEO (“Directeur général adjoint”) of AXA.

Thomas Buberl holds a Master of Economics degree from WHU Koblenz (Germany), a MBA from Lancaster University (UK) and a PhD in Economics from the University of St.Gallen (Switzerland). He has been distinguished as a Young Global Leader by the World Economic Forum.

A German and Swiss citizen, Thomas Buberl was born in 1973