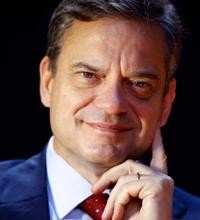 
He is also Chairman of Italgas and Visiting Scholar at Harvard's Weatherhead Center for International Affairs and Senior Fellow at LUISS School of European Political Economy and at the Istituto Affari Internazionali in Rome. He is member of the Board of Tages Holding and chairs the Italian Chapter of the Alumni of the University of Chicago. From June 2005 to December 2011 he was a Member of the Executive Board of the European Central Bank. He started his career in 1983 as an Economist at the Research Department of the Banca d’Italia. In 1994 he moved to the European Monetary Institute, in Frankfurt, to head the Policy Division, to prepare for the creation of the ECB. In October 1998 he became Director General for International Affairs in the Italian Treasury, acting as G7 and G20 Deputy and Vice President of the Economic and Financial Committee of the EU. He was also Chairman of the WP3 of the OECD. He was Chairman of the Board of Snam, of SACE, and member of the Boards of Finmeccanica, MTS, the European Investment Bank and Morgan Stanley International. He is author of several articles and books on international and European monetary and financial issues (available in www.lorenzobinismaghi.com). He recently published "Austerity: European Democracies against the Wall" (CEPS, July 2013), "33 false verità sull'Europa" (Il Mulino, April 2014) and “La tentazione di andarsene: fuori dall’Europa c’è un futuro per l’Italia?” (Il Mulino, May 2017). He is currently member of the A-List of Commentators for the Financial Times.