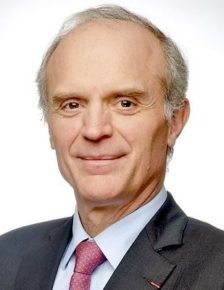 
Florent Menegaux joined PwC in 1986 as a consultant then manager. In 1991, he became Finance Director of Exel Logistics France, and was promoted General Manager 6 months later. From 1995 to 1996, he was General Manager of the General Cargo Transport division for the Norbert Dentressangle Group.

Florent Menegaux joined Michelin in 1997, as Commercial Director for Truck Tires in UK and Ireland.

In January 2006, Florent Menegaux became responsible for the Group’s Passenger Car and Light Truck Tire Replacement Business Unit for Europe, before being appointed Executive VP for the Passenger Car and Light Truck worldwide activities, becoming a member of the Group Executive Committee, in 2008. He also oversees Michelin’s Motorsports activities and Materials business.

In December 2014, he was appointed COO and then Senior Executive VP of Michelin in 2017. In January 2018, he also supervises the Group’s Business Directions, and the Manufacturing, Supply Chain and Customer Experience Operational Directions.

In May 2018, he became Managing General Partner of the Group.
On May 17, 2019, Florent Menegaux is named CEO of Michelin.


08:00
Debate 2
After the health crisis, coming out of the economic crisis
Canal 6
Watch the overview Watch on-demand video