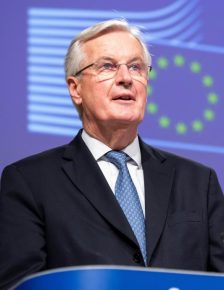 
Born in 1951 in La Tronche in Isère, Michel Barnier graduated from the Paris Business School in 1972.
He began his political career in Savoy at an early age as a Gaullist activist at the age of 14. In 1973 he was elected general councilor of Savoy for the canton of Bourg-Saint-Maurice (1973-1999).
During the legislative elections of 1978, the Savoyard joined the benches of the National Assembly, thus becoming at 27 years the youngest of the Parliament.
In 1982, he became head of the Savoie General Council until 1999.
In the early 1980s, he launched the idea with the three-time Olympic champion Jean-Claude Killy to host the Winter Olympics in Savoy. On October 17, 1986, after 6 rounds of voting, the International Olympic Committee awarded Albertville the organization of the XVI Winter Games of 1992. He then took with Jean-Claude Killy the co-chairmanship of the organizing committee. games.
In 1993, Michel Barnier was appointed Minister of the Environment in the Government of Edouard Balladur. In 1995, he was a member of the government of Alain Juppé in charge of European affairs.
Elected senator, he sat in the Upper Assembly between 1997 and 1999.
In 1999, the President of the Republic Jacques Chirac appointed him European Commissioner. He was then in charge of regional policy from 1999 to 2004.
He became Minister of Foreign Affairs from 2004 to 2005, then in 2007 President Nicolas Sarkozy appointed him Minister of Agriculture from 2007 to 2009.
During the 2009 European elections, he led the list in lle-de-France by garnering nearly 30% of the vote, the UMP list sent around thirty French parliamentarians to the delegation of the European People's Party to the European Parliament in Strasbourg.
In the process, he was appointed European Commissioner in charge of the internal market and financial services. As such, he brought 41 texts to the European Parliament and to the Council on financial regulation to restore order and morale in financial services after the 2008 crisis.
In 2014, he is a candidate to be leader of the European People's Party for the European elections. However, it is the former Luxembourg Prime Minister Jean-Claude Juncker who is chosen to be the party's candidate at the Dublin Congress. The latter thus obtained the post of President of the European Commission in 2014.
In 2015, President Jean-Claude Juncker appointed him special adviser on defense and security issues.
Following the June 2016 referendum in the United Kingdom and the victory of Brexit, the President of the European Commission offers him to lead and lead the negotiations for the orderly withdrawal of the United Kingdom from the European Union. He takes office on October 1, 2016.
After several months of negotiations, Michel Barnier obtained an agreement in the fall of 2018, but due to the lack of a majority in the House of Commons, this agreement could not be ratified under the government of Theresa May.
The change of Prime Minister in the United Kingdom with the arrival of Boris Johnson makes it possible to unblock the situation, a modified agreement is finally agreed between the United Kingdom and the European Union allowing the effective exit of the United Kingdom from the Union European Union on January 31, 2020. After its release, the country benefited from an 11-month transition period which ended on December 31, 2020.
In October 2019, Michel Barnier was appointed to lead and lead the negotiations on the future relationship between the United Kingdom and the European Union. These negotiations made it possible to build the foundations of the new commercial, economic and social relationship between the two blocs.
In March 2021, Michel Barnier leaves the European Commission for good. He then devoted himself to the promotion of his book La Grande Illusion published by Gallimard, an account in diary form of his 4 years as European Union negotiator for Brexit.


18:30
Debate 1
How the crisis is redrawing the world map
Amphi 1
Watch the overview Watch on-demand video