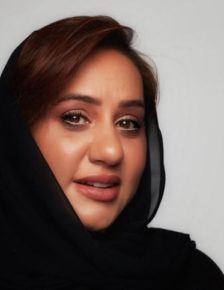 
HH AlSayyida Basma Al Said is a well-established Mental Health Clinical Counselor, founder of the first mental health clinic in Oman, Whispers of Serenity and founder of mental health campaign Not Alone. On 2014, Her Highness initiated “Not Alone” an ongoing campaign to create societal awareness of the importance of mental well- being.

Moreover, she is the current Honorary President of Oman Heritage – a team that looks after and preserves Omani practices and culture.

Awarded as International Social Responsibility Ambassador by The International Union for Social Responsibility (IUSR) for 2020 and 2021, and has been honored as one of the 50 Omani women who have played a significant role in the country’s development and for their achievements in the field of their work by the Honorable Lady, Wife of His Majesty Sultan Haitham bin Tarik on Omani Women’s Day 2020.

On February 2022, World Humanitarian Forum has welcomed Sayyida Basma as one of the new members of Medical and Health Programming board while The Diana Award- the only charity named after the legacy of Princess Diana has announced about her being the first Arab to judge young candidates around the world who have excelled in social work. Moreover, she was also one of the speakers to the Inaugural of Forbes USA for World’s Most Powerful Women for International Women’s Day where HE Hillary Clinton had headlined last March this year.