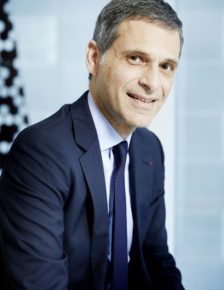 
Born in Beirut in 1970, Rodolphe Saadé graduated from Concordia University (Montreal) in Commerce and Marketing. After graduating, he founded a water cooler company in Lebanon, before joining the CMA CGM group led by his father Jacques Saadé in 1994. He worked mainly in New York and Hong Kong before moving to CMA CGM’s headquarters in Marseille, where he managed various shipping lines. In 2004, he took charge of the expansion of Delmas lines in Africa and the Indian Ocean. Appointed Vice President and member of the Board in 2010, he oversaw the financial restructuring of the group. In 2015, he led the acquisition of Neptune Orient Lines and the discussions resulting in the Ocean Alliance, an operating agreement with Cosco, Evergreen and OOCL. In 2017, Rodolphe Saadé was appointed Chairman and CEO of the CMA CGM Group. Since his appointment, his strategy has been based on 5 core pillars: strengthening shipping, developing logistics, innovation and digitalization, sustainable solutions, developing human capital. In line with this strategy, CMA CGM acquired CEVA Logistics in 2019. As the health crisis has reinforced the need for resilient and integrated supply chains, Rodolphe Saadé has accelerated CMA CGM’s transformation by launching the CMA CGM Air Cargo division dedicated to air freight and acquiring Ingram CLS to strengthen the Group’s position in e-commerce logistics, GEFCO to become the world leader in automotive logistics and Colis Privé to offer customers last-mile solutions. In 2022, Rodolphe Saadé laid the foundation stone of TANGRAM, the Group's innovation and training center.