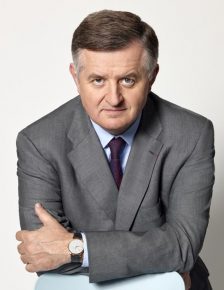 
Augustin de Romanet is a graduate of the Institut d’Études Politiques in Paris and the École Nationale d'Administration (ENA). He is, since 2012, Chairman and CEO of Groupe ADP (Aéroports de Paris). Augustin de Romanet was Director of La Caisse des Dépôts et Consignations (2007-2012) and chaired the Fonds Stratégique d’Investissement (2009 – 2012). Previously, he was Deputy Chief Financial Officer of Crédit Agricole. From June 2005 to October 2006, Augustin de Romanet was Deputy Secretary General to the President of the Republic Jacques Chirac. Previously, he was Chief of Staff of the Minister in charge of the budget ; Deputy Chief of Staff of the Minister of Economy, Finance and Industry ; Chief of Staff of the Minister of Employment, Labor and Social Cohesion, and Deputy Chief of Staff of the Prime Minister, Jean-Pierre Raffarin. Augustin de Romanet is member of the Supervisory Board of Le Cercle des Economistes, founding member and Director of the “Institut pour l’Innovation Économique et Sociale” (2IES) endowment fund, Chairman of the Board of Directors of the Paris Europlace association and a Director of the Fondact association for participative management, employee savings and responsible share ownership. He is also Vice-Chairman of the Board of Directors of SCOR, Chairman of the Sustainable Development Committee and member of the Strategy, Audit, Risk and Crisis Management Committees. Since February 2021, he is member of the Board of Directors of GMR Airports. Augustin de Romanet is a Knight of the Legion of Honor and has been awarded the French National Defense Medal.