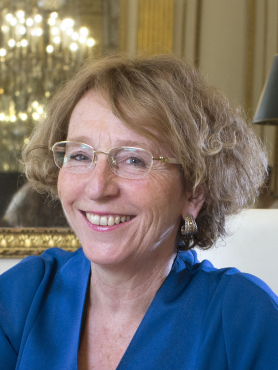 From May 2014 to May 2017, Muriel Pénicaud was France’s Ambassador for International Investments and CEO of Business France.

Business France is the national agency supporting the international development of the French economy (assisting SMEs and mid-caps with their export strategies, canvassing for foreign investment and promoting France’s image abroad), and was founded following the merger in early 2015 between the agencies AFII and Ubifrance.

From 2008 to 2014, Muriel Pénicaud held the position of Executive Vice-President, Human Resources at Groupe Danone, where she was a member of the Executive Committee, also in charge of social innovation, and chaired the Board of the Danone Ecosystem Fund. She also co-founded EVE, a leadership development programme for women. She held various human resource management positions at Danone between 1993 and 2002.

From 2002 to 2008, she served as Executive Vice-President of Organisation, Human Resources and Sustainable Development at Dassault Systèmes, and was a member of its Executive Committee.

From 1985 to 2002 she held a number of senior positions within the Ministry of Labour and was a Ministerial Advisor from 1991 to 1993. Muriel Pénicaud began her career as a local government administrator, and oversaw one of the first local missions for youth integration.

Muriel Pénicaud has chaired the Board of Directors of the French National Institute of Labour, Employment and Vocational Training (INTEFP), the Board of Directors of AgroParisTech (Paris Institute of Technology for Life, Food and Environmental Sciences) and the National Education and Economy Council (CNEE). From 2010 to 2017, she was co-founder and Vice-President of TV DMA, the leading academic TV channel for Corporate Management and Business Law.
At the start of 2017, she was appointed a member of the Global Summit of Women’s International Planning Committee.

Muriel Pénicaud was born in 1955. She has two children. She has degrees in History, Educational Sciences and Clinical Psychology and is an Executive Alumna of INSEAD Business School. She has also been awarded the French Legion of Honour and the National Order of Merit.