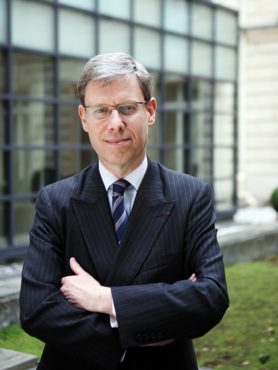 Jean Beunardeau has graduated from Ecole Polytechnique (Paris) and from Ecole Nationale Supérieure des Télécommunications (Paris). He has a degree in Economics (Institut d’Etudes Politiques, Paris).
Prior to joining HSBC, he was high ranking civil servant at the French Ministry of Economy and Finance, then technical advisor of French Prime Minister.
He joined HSBC in 1997 in the Corporate Finance Department, became Managing Director in 2000 and made various M&A and ECM deals, mainly in the transport, telecom, media and technology sectors. In March 2004, he was appointed Co-head of Corporate, Investment Banking and Markets of HSBC France. In 2005, he has been General Manager. In September 2007, he was appointed Head of Global Banking and Markets, HSBC France and Global Co-head of Public Sector.