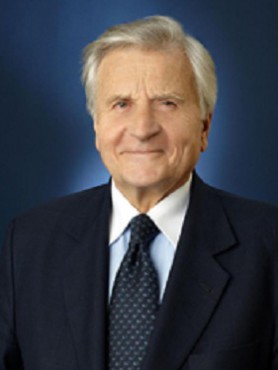 Jean-Claude Trichet is presently chairman of the Group of Thirty (Washington), chairman of the Board of Directors of Bruegel Institute and chairman of the Trilateral Commission (Europe). He is a member of the « Institut de France » (Académie des Sciences Morales et Politiques).

Born in Lyon, Jean-Claude Trichet is an honorary Inspecteur général des Finances and Ingénieur civil des Mines. He is a graduate of the Ecole nationale supérieure des Mines de Nancy, of the Institut d’études politiques de Paris, of the Université de Paris (in economics) and of the Ecole nationale d’administration. He worked in the competitive sector from 1966 to 1968. He was appointed to the Inspection générale des Finances in 1971.

He was assigned to various posts at the Ministry of Finance in the General Inspectorate of Finance and later in the Treasury Department, where in 1976 he became Secretary General of the Interministerial Committee for Improving Industrial Structures (CIASI).

Jean-Claude Trichet was made an adviser to the President of the French Republic in 1978. In 1986 he directed the Private Office of the Minister of Economic Affairs, Finance and Privatisation. In 1987 he became Director of the Treasury. He was Chairman of the European Monetary Committee from 1992 until his appointment as Governor of the Banque de France in 1993. He was instrumental in the implementation of the French strategy of “competitive desinflation” in the 80’s and the 90’s.

Jean-Claude Trichet was elected Chairman of the Group of Ten (G10) Governors on 29 June 2003. He was elected President of the “Global economy meeting” of Central Bank governors and President of the Group of Governors and heads of supervision (GHOS) in Basel (until October 2011). He was appointed President of the European Central Bank on 16 October 2003 by common accord of the Governments of the Member States that have adopted the euro at the level of Heads of State or Government for a term of office of eight years starting on 1 November 2003 and ending on 31 October 2011. Since late 2010 and until end of October 2011, Mr Trichet has also been Chairman of the European Systemic Risk Board (ESRB).

He was named “Person of the Year” (2007) and one of the fifty faces that shaped the decade (2009) by the Financial Times. He was named “Policymaker of the Year” by The International Economy magazine (1991 and 2007) and was n° 5 of the “World most powerful” in the 2008 Newsweek list as well as n° 5 of the “most powerful figures in Finance” (Institutional Investors-2008). He was one of the “Most influential people in the world” in Time Magazine (2011). He has received a number of awards, including the 2011 International Charlemagne Prize of Aachen for his contribution to European unity and also received the 2011 Global Economy Prize from the Kiel Institute for the World Economy. He has been awarded honorary doctorates by several universities (Stirling, Montreal, Liege, Tel Aviv, Bologne and Sofia).