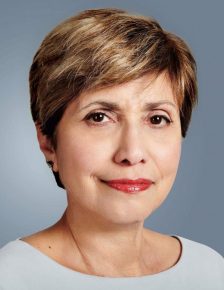 
Méka Brunel is a business leader in the real estate industry. She is an ETP engineer and FRICS and has an Executive MBA from HEC. From 1996, she held a range of management positions at Simco, which later merged with Gecina. In 2006, she became Chief Executive Officer of Eurosic, before joining Ivanhoé Cambridge in 2009 as Executive President Europe. She has been a Director at Gecina since 2014 and was appointed as its Chief Executive Officer in January 2017. Fully involved in both community life and industry associations, particularly as Honorary President of the HQE-France GBC association, Vice-Chairwoman of the Palladio Foundation, Chair & Director of EPRA, Director of FSIF, Méka Brunel was appointed as a Director of Hammerson plc in November 2019. She was also President of the Greater Paris Metropolitan Authority’s Development Board from October 2017 to April 2021. Méka Brunel has been honored with the title of Chevalier de la Légion d’Honneur. Lastly, Méka Brunel was named Professional of the Year in the 2013 and 2018 Pierres d’Or awards.