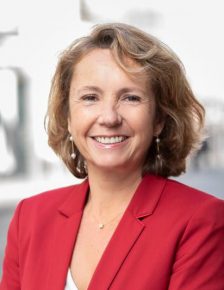 
Marie-Ange Debon has been CEO of Keolis Group since September 2020.

From 2008 to March 2020, she was Deputy Chief Executive Officer of SUEZ Group, where she successively led the International division and the French division. She had initially joined SUEZ Group as General Secretary when it was listed on the stock exchange in 2008.

From 1998 to 2008, she held various positions at executive level in the Thomson Group, now Technicolor.

Between 1994 and 1998, she was Managing Director at France 3 – National TV channel after having spent four years as a Magistrate with the French Cour des Comptes.

Marie-Ange Debon has been Chairwoman of the UTP. (French Public Transport Association) since June 2021.