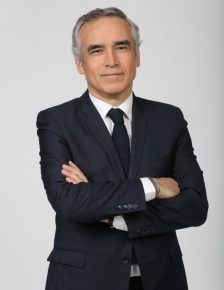 
Bruno Jeudy runs the political and economical department at Paris Match and is a panelist on the BFM TV program 22h Max. He is also a regular guest on C dans l’air on France 5. A young graduate of the University of Nantes, Mr. Jeudy went on to earn a masters degree in Economic and Social Administration at the University of Angers before heading to the University of Paris in 1988 to earn a degree in Information and Communication. He began working in journalism at Ouest France in 1987 and was a staff political journalist at Le Parisien and Le Figaro before being appointed chief political writer at the Journal du Dimanche in 2010. He was named executive director of the Political department of Paris Match in 2014. Bruno Jeudy is the author of Les Coulisses d’une Victoire (Archipel Books, 2006) and Nicolas Sarkozy à l’Elysée (Archipel Books, 2007).