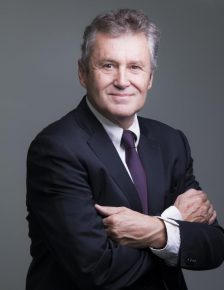 
Aged 60, Thierry Blandinieres is a graduate of the Ecole Supérieure de Commerce de Nantes and holds an Executive MBA from the HEC. He began his career in the chemicals and cosmetics industry. He moved to the agribusiness industry in 1991.

He joined the InVivo group in October 2013 as CEO. On his arrival, he initiated the strategic project "2025 by InVivo", thus starting a profound transformation of the group. He subsequently embarked upon the co-creation of the "2030 by InVivo" plan with the ambition of fostering the emergence of the third way of agriculture to support food transition.

Thierry Blandinières has also actively worked in recent years to make his group a Société à Mission. This has been done since October 2020. By adopting this status at the group level and soon for all of its subsidiaries, InVivo is asserting its willigness to use its business model to serve its commitments.

In April 2021, the Ministry of Higher Education, Research and Innovation appointed Thierry Blandinières, member of the Board of Directors of the Center for International Cooperation in Agricultural Research for Development (CIRAD).

Last May, InVivo signed an agreement to acquire Soufflet Group, a family-owned agri-food group. This acquisition will lead InVivo to a change of scale and create a European leader in agriculture and food chain.

Thierry Blandinières has been France’s Foreign Trade Advisor for 12 years and actively contributes to the development of France’s international trade.

He was made a Knight in the Order of Agricultural Merit since 2015.