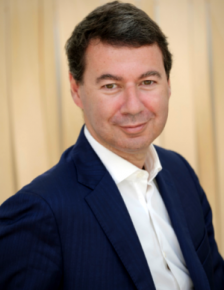 
Holding degrees from the ESSEC business school and Sciences Po Paris, he is also a graduate of the Ecole Nationale d’Administration (2000).

Following several positions at the French Ministry of Economy and Finance, in 2004 he became Adviser to the Minister for Research, Mr. François d’Aubert, in charge of budgetary affairs.

The following year he was appointed Chief Financial Officer of the French National Centre of Space Studies (CNES), where he made a significant contribution to transforming project management.

He also chaired the board of CLS, a subsidiary of CNES, which he helped to develop and where he coordinated the arrival of Ardian as a private shareholder.

In 2014 he joined Segula Technologies, a global engineering and technology consulting group. As CEO, he has overseen strong growth in the Group (more than doubling its size in 6 years), in particular outside France, with a specific focus on innovation.