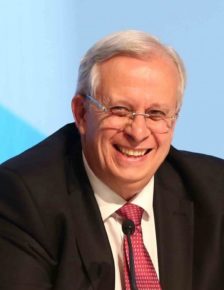 
Jacques Aschenbroich is an engineer from the Corps des Mines and has held several positions in the French administration. He was in the Prime Minister's office in 1987 and 1988. He then led an industrial career within the Saint-Gobain group from 1988 to 2008: after managing subsidiaries in Brazil and Germany, he became head of the Flat Glass Division of Compagnie de Saint-Gobain and Chairman of Saint-Gobain Vitrage in 1996. Then, as Deputy Chief Executive Officer of Compagnie de Saint-Gobain between 2001 and 2008, he was in charge of the Flat Glass and High-Performance Materials Sectors from January 2007, and of the Group's operations in the United States as Director of Saint-Gobain Corporation and General Delegate for the United States and Canada from September of the same year. Director and Chief Executive Officer since March 2009, Jacques Aschenbroich was Chairman and Chief Executive Officer of the Valeo Group from February 2016 to January 2022. Since January 2022, he has been Chairman of the Board of Directors. He is also Chairman of the Board of Directors of Orange, President of the Ecole Nationale Supérieure Mines ParisTech, Director of BNP Paribas, Director of TotalEnergies and Co-Chairman of the Franco-Japanese Business Club. Awards : Officer of the Legion of Honor Officer in the National Order of Merit