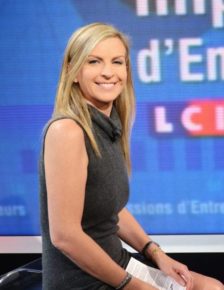 
Isabelle Gounin-Lévy graduated from the Institut d'Etudes Politiques d'Aix en Provence and holds a Master's degree in Public Law. She began her career in the written press, first at the Dauphiné Libéré and then at the Figaro. She very quickly turned to economic subjects, and worked successively at Le Revenu Français, Option Finance and La Tribune. She then specialised in the fields of banking and insurance. At that time, she worked with Europe 1 for the stock market flashes before going into television and participating in the creation of LCI.

On this channel, she works as a presenter for the « Journal de l'Eco » and the « Invité de l'Eco », as a reporter and as a host during debates conducted with the channel and its partners, such as the « Rencontres Economiques d'Aix-en Provence », the « Entretiens de Royaumont » and Jacques Attali's « LH Forum ».

She also took on the role of producer-director when she launched the SME section, « Oser entreprendre », which became « Impressions d'entrepreneurs », or short programmes such as « Mon Premier Job », where she invites personalities from all walks of life to talk about the beginnings of their careers.  This season, she can be found on LCI's weekend morning show, for her editorials, but also during the week in the 9h-12h and 12h-15h programmes.