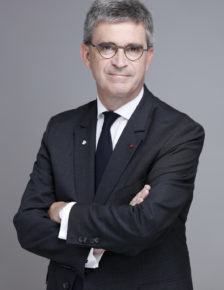 
Aged 57, Bruno Angles is a graduate of the Ecole Polytechnique, the Ponts et Chaussées and the Collège des Ingénieurs. In 1988, he began his career in the construction sector, then at the Ministry of Public Works, before joining the cabinet of Bernard Bosson, Minister of Public Works, Transport and Tourism, as technical advisor (1993). In 1994, he was appointed General Director of Autoroutes et Tunnel du Mont- Blanc, then in 1996, he joined McKinsey and became Associate Director in 2000. In 2004, he was appointed CEO of Vinci Energies (27,000 employees). After having been a Senior Partner of Mercer Delta, he joined in 2007 the Macquarie Group, a financial institution offering financing, financial advisory and investment services, specialized in infrastructure, of which he was Chairman France from 2007 to 2016. From April 2016 to April 2021, he was President France and Belgium of Credit Suisse and Chairman of the Executive Committee of Credit Suisse in France. From 2015 to 2019, he was President and, from 2019, Honorary President of the Association of former students and graduates of the École Polytechnique (AX). He joins the AG2R LA MONDIALE Group Management Committee in May 2021 as Deputy Chief Executive Officer. Since May 2022, Bruno Angles has been Chief Executive Officer of AG2R LA MONDIALE. He has also been a director of RATP since 2016 and of the Fondation de France since 2019. Bruno Angles is an Officer of the Legion of Honor and Commander of the National Order of Merit.