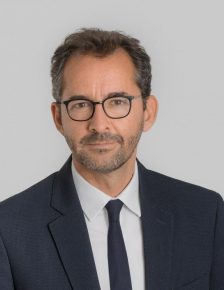 
Hakim El Karoui is a former student of the École Normale Supérieure and associate professor of geography. Since May 2021, he has managed the Paris office in Brunswick as a Senior Partner. He was technical advisor to Jean Pierre Raffarin and Thierry Breton. He was also a banker at Rothschild, partner at Roland Berger, before founding Volentia, a strategy consulting firm. He created an association called "Club XXIᵉ siècle" to raise awareness among opinion leaders about diversity and support young people. As a writer, he has published several essays on topics such as Europe, the West and the 2008 financial crisis. He has also written reports for the Institut Montaigne, including “Un Islam français est possible” ( 2016), “The new“ Arab policy ”of France” (2017), “La fabrique de l'islamisme” (2018) and “Popular quarters have a future” (2020). He has just published "Les Militants du Djihad" with Fayard in 2021. He is also the author of "The Struggle of the Ages, how retirees took power (Flammarion, 2013)