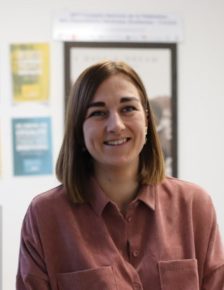 
Orlane François was born in May 1995 and grew up in the region of Lorraine, in the east of France. After passing her baccalaureate in June 2013, she studied Sports Sciences (STAPS) at the University of Lorraine, in Nancy. In her second year, she specialized in Sport Management.

As soon as she arrived in the higher education, Orlane got involved in the local student union, then she got elected as student representative in the board of Sport Sciences department, then in the board of the University of Lorraine.

In 2016, she became President of the ANESTAPS (National Union of Sports Sciences Students) and got elected in June 2017 to the National Council for Higher Education.

In the same year, she joined the executive committee of the FAGE (French National Student Union) as Vice-President. She is now president of the organization.