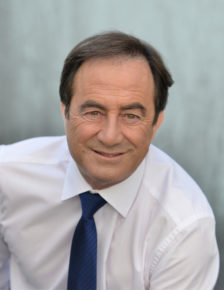 
Hervé Schiavetti was born on 6 July 1956 in Marseille (Bouches-du-Rhône).
He holds a degree in Sociology and a certificate in Political Economy from the University of Aix-en-Provence.

He began his political life in 1992 when he was elected Regional Councillor of Provence Alpes-Côtes d'Azur in the opposition.

In 1997, Mr. Schiavetti was elected in a by-election as General Councillor of the Bouches du Rhône for the canton of Arles-Camargue. Re-elected in 1998, he then took over the Presidency of the Commission for Spatial Planning. During the 2004 departmental elections, he was re-elected in the first round for the same canton and has been sitting since 2007 as 2nd vice-president and Delegate for the protection of natural resources and the prevention of environmental risks.