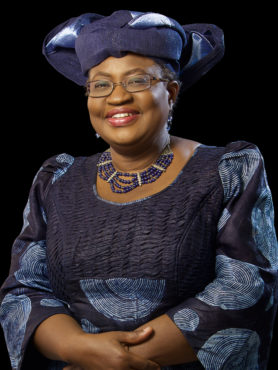 Dr Ngozi Okonjo-Iweala is Chair of the Board of Gavi, the Global Alliance for Vaccines and Immunisation. Since its creation in 2000, Gavi has immunised 580 million children globally and saved eight million lives. She is also Senior Adviser at Lazard, one the world’s premier financial advisory and asset management firms.

Previously, Dr Okonjo-Iweala served twice as Nigeria’s Finance Minister, from 2003-2006, 2011-2015, and briefly Foreign Minister in 2006, the first woman to hold both positions. She spent a 25-year career at the World Bank as a development economist, rising to the No. 2 position of Managing Director, responsible for an $81 billion operational portfolio including Europe and Central Asia, South Asia, and Africa (2007-2011).

Dr Okonjo-Iweala is currently also Chair of the Board of the African Union’s African Risk Capacity (ARC), an innovative weather-based insurance mechanism for African countries; and co-Chair of the Global Commission on the Economy and Climate with Lord Nicolas Stern and Paul Polman. She has served for a decade on the Rockefeller Foundation Board, the One Campaign, and the World Economic Forum Young Global Leaders. She is a member of the Standard Chartered Bank PLC and Twitter Boards among other corporate boards. She presently serves on the following advisory boards or groups – the Asian Infrastructure Investment Bank, Harvard University International Advisory Board, the Oxford University Martin School Advisory Council, Mercy Corps, Women’s World Banking, the International Commission on Financing Global Education (Chaired by Gordon Brown), Japan International Cooperation Agency (JICA), and Tax Inspectors Without Borders of the OECD among others.

Can we Eradicate Corruption?