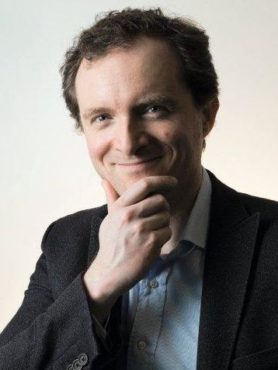 Augustin Landier is professor of economics at the Toulouse School of Economics since September 2009. He also heads the research lab of Axa-IM Chorus, a quantitative asset management company. He was an assistant professor in finance at New York University (2004-2009), at the University of Chicago (2002-2004), and was a Resident Scholar at the International Monetary Fund (2009). Augustin’s research is largely focused on behavioral finance, corporate finance, banking and has been published in lead scientific Journals, such as the Quarterly Journal of Economics, the Review of Economic Studies, The Review of Financial Studies, the Journal of Finance. He is also active in the public policy debate, was a member of the French Council of Economic Analysis until july 2016 and has published four books, « Le Grand Méchant Marché » (Flammarion 2007), « Investing for Change » (Oxford Press 2009) , “10 idées qui coulent la France” (Flammarion 2013).  He was awarded the 2014 “best french young economist” award by Le Cercle des Economistes.

“Why has CEO pay increased so much?”, The Quarterly Journal of Economics , 2008

Distrust of institutions and political representatives, the rise of authoritarian regimes in Europe and the world: People have never seemed so sceptical about the effectiveness of democratic institutions and processes at the national and international levels. This trend is global: A growing share of the population, especially among young people, shows its lack of attachment to democratic principles and a form of admiration for authoritarian regimes.