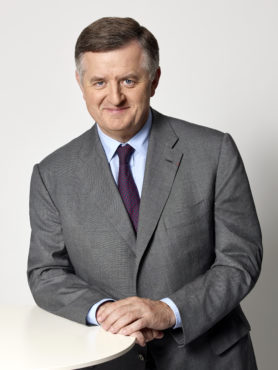 Augustin de ROMANET, born on 2 April 1961, is a graduate of the Institut d’Études Politiques in Paris and of the École Nationale de l’Administration. Previously Chief Executive Officer of Caisse des dépôts et consignations between March 2007 and March 2012, Augustin de Romanet also chaired the Strategic Investment Fund between 2009 and 2012. Prior to that, he served as Deputy Finance Director of Crédit Agricole SA, and as a member of the Executive Committee. Before taking up this position, Mr de Romanet was Deputy Secretary General to the President of the Republic between June 2005 and October 2006, and held responsibilities in various ministerial offices. Between 2002 and 2005, he was chief of staff to Alain Lambert, Deputy Budget Minister, the Deputy Cabinet Director for Francis Mer, Minister for the Economy, Finance and Industry, Cabinet Director for Jean-Louis Borloo, Minister for Employment, Labour and Social Cohesion, and lastly, Deputy Cabinet Director for Jean-Pierre Raffarin, Prime Minister.