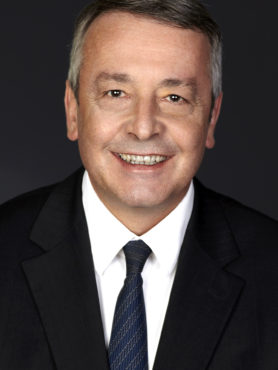 A graduate from the École polytechnique (1977 class) and PhD in Civil Engineering from the École nationale des ponts et chaussées, Antoine Frérot started his career in 1981 as a research engineer at the Bureau central d’études pour l’Outre-Mer.
In 1983 he joined the Research centre at the École nationale des ponts et chaussées and become deputy director in 1984. From 1988 to 1990 he was head of Financial Operations at the Crédit National.
He joined the Compagnie Générale des Eaux in 1990 working at the Compagnie Générale d’Entreprises Automobiles (CGEA), of which he became managing director. In 2000 he was appointed CEO of Veolia Transport. In 2003 he was appointed CEO of Veolia Water, and Executive VP of Veolia Environnement.
At the end of 2009, Antoine Frérot was appointed CEO and, in December 2010, Chairman and CEO of Veolia Environnement.