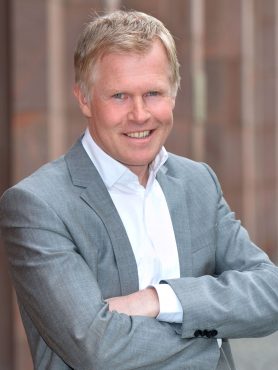 Henrik Enderlein is Professor of Political Economy, Vice-President and Dean of Strategy at the Hertie School of Governance. He is also the Founding Director of the Jacques Delors Institut – Berlin.

He holds degrees from Sciences Po, Paris, and Columbia University, New York. He prepared his PhD in Political Science at the Max Planck Institute for the Study of Societies in Cologne. From 2001 – 2003, he worked as an economist at the European Central Bank before taking up a Junior Professorship in Economics at the Free University Berlin. In 2003 he was awarded the Max Planck Society’s Otto-Hahn Medal for outstanding achievements by young scientists. He joined the Hertie School of Governance as a member of the founding faculty in 2005. During the academic year 2006 – 2007, he was Fulbright Distinguished Chair at Duke University’s Political Science Department. In 2012/2013, he was the Pierre Keller Visiting Professor at the Harvard Kennedy School and the Weatherhead Center for International Affairs. Since 2013, he is a member of the independent German fiscal council.