What if the Sun also Rises in the West…

Over the last 10 years, there has been a strong belief forming of the final shift in economic and eventual political power from OECD countries to emerging nations. The purpose of the 12th Rencontres Économiques d’Aix-en-Provence was to seek to provide a more balanced view of the world’s future, a vision according to which each and all will play their part, especially in mastering new technologie 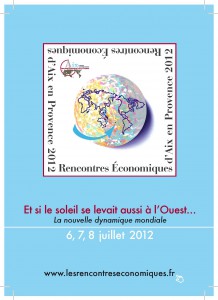 s, in the fields of scarce resources, communication and health. Of course, emerging markets will continue to experience rapid growth, but the United States, Japan and Europe still have a lot of advantages, including the training and qualification of their workforce, the significant financial resources available to them and the consistency of their social models. The forum has been divided into four parts: on Friday afternoon, the sessions have focused on 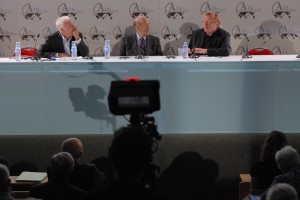 newly emerged imbalances and the impact they can have on Western societies; Saturday morning was dedicated to the analysis of the actors in economic and social life; Saturday afternoon’s sessions conceived of policies to implement so that economies can rebound; the sessions on Sunday morning tried to put all the contributions back in the perspective of a new global balance. Les Rencontres Économiques d’Aix-en-Provence will be concluded, as always, by a final statement by the Cercle des économistes. The 2012 edition, built on the theme “What if the Sun also Rises in the West… The New Global Dynamics”, brought together Masahiko Aoki (Stanford University), Valéry Giscard d’Estaing (former French Republic President), Jean-Marie Guehenno (Columbia University), Mario Monti (Prime Minister of italy), Pierre Moscovici (Minister of economy and finance, France) and Peter Sloterdijk (philosopher). 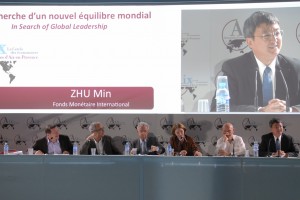 A the end of the conference, the members of Le cercle des économistes have presented their common statement (short version) :

For a rebound of developed countries

The fate of advanced countries is not written yet. What will be the next wave of innovation? The impact of the demographical transition? How can one capture global savings and finance long-term investment? How will global imbalances evolve? These are four sources of uncertainty which the United States, Japan and Europe must tackle in order to remain driving forces of the new global equilibrium and to revive sustainable growth.

Europe 2. Rediscuss the schedule of debt payments, at Euro Zone level, particularly for Spain, and envisage restructurations if needed. Debt is not necessarily evil if it finances long-term industrial risk. 3. For countries in macroeconomic distress, use structural funds to finance a decrease in unit labor costs. These funds are currently under- or misused while they could trigger a real fiscal devaluation. 4. For countries able to restart because of their industrial base, bring back borrowing costs to sensible levels. Europe is moving towards a partial pooling of sovereign debt, through the purchase of government securities by the ECB, or the use of the European stability mechanism. 5. A fiscal committee to complement the banking union and the monetary union. a. An independent governance, with a democratic legitimacy, through a qualified majority decision process. b. A principle of common control of national budgets, aiming at a Euro Zone budget. c. A counter-cyclical Stability and Growth Pact.

France 6. Enhance the profitability of the corporate sector through a massive transfer of the companies’ social charges to the Contribution Sociale Géneralisée (CSG). In addition, eliminate certain rents, move upmarket in the tradable sector and foster long-term savings, thus triggering the positive supply shock that France needs 7. A pro-active policy for the youth. a. Broaden the policy of clustering universities of excellence to programs leading to high employability (Baccalauréat +3) b. Implement the single open-ended labor contract with flexibility 8. To reduce indebtedness, implement a retirement system with points, with individual choice of retirement date and with the aim of breaking even in thirty years.