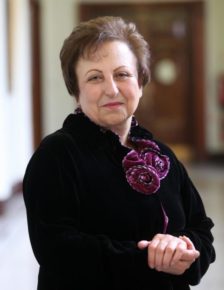 
Shirin Ebadi, the first Iranian and Muslim woman to receive the Nobel Peace Prize, became a judge after graduating from Tehran University Law School and passing the relevant qualifying exams. She soon progressed through the ranks and in 1975 became the first woman to preside over a court. In the wake of the 1979 Islamic Revolution, all female judges were dismissed, and Shirin Ebadi was demoted to the position of a clerk in the very same court over which she once presided. Since she could not tolerate the situation any longer, she put in a request for early retirement. After her retirement request was granted, Dr. Ebadi applied for a licence to practice law to continue serving in another capacity in the legal profession. But her request was not approved for seven years because she had published several critical articles. Finally, in 1992, she succeeded in obtaining a lawyer's licence from the Central Bar Association. In her new profession, she focused on defending victims of human rights abuse, while simultaneously writing and publishing 14 books, including the Rights of the Child, the Rights of Women, and Tradition and Modernity in the Iranian legal system. Many of her books have been translated into and published in several languages. Shirin Ebadi also taught Urban Rights and Women's Rights at the universities of Tehran and Allameh Tabataba'i for six years.

Along with her colleagues, she set up three NGOs in Iran, called Society for Protecting the Rights of the Child, Mine Clearing Collaboration Association, and Centre for Defenders of Human Rights. On the international front, in 2006 along with other female Nobel laureates, she founded the Nobel Women's Initiative, which is based in Canada.

Shirin Ebadi has won numerous awards, including the Leibniz Ring in Germany, Légion d'Honneur in France, and Scholars at Risk prize in Ireland. She is also an honorary citizen of several world cities, including Paris and Genoa.

Moreover, to date, Shirin Ebadi has received 26 honorary doctorates from various universities throughout the world, including the University of Cambridge (UK), Brown University (United States), and University of British Columbia (Canada).

Shirin Ebadi was first imprisoned in 1999 and again prosecuted in 2009 for criticizing the Islamic Republic. Security forces raided her office and the government froze her bank accounts and seized her assets. Since then she has been living outside Iran. In 2012, she established the Centre for Defenders of Human Rights in London through which she continues her activities towards advancing human rights in Iran and in Islamic countries.