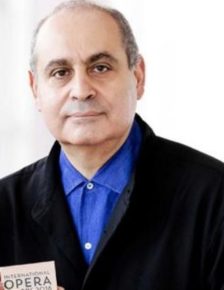 
Born in Beirut Lebanon, Pierre Audi studied at Oxford University before founding , in 1979, the Almeida Theatre in London and its Festival of Contemporary Music, which he directed until 1989. He was appointed Director of Dutch National Opera in 1988, heading the Company for 30 years till August 2018 . DNO was named Opera Company of the Year in 2016.
In addition to his responsibilities at the opera in Amsterdam, he was for ten years - between 2004 and 2014 - artistic director of the Holland Festival.
Since September 2018 he is General Director of the Festival d’Aix-en-Provence, a responsibility he combines with that of artistic director of the Park Avenue Armory in New York.
As a stage director he collaborated on opera productions with many visual artists notably Karel Appel, Georg Baselitz, Anish Kapoor, Herzog & de Meuron, Jannis Kounellis, Berlinde De Bruyckere and Jonathan Meese.
Many of his productions, introduced in Amsterdam, have gone on to win acclaim on other stages, including his cycle of all four Monteverdi operas. He staged the first Netherlands production of Wagner’s Ring cycle, as well as many other opera's from across the whole repertoire including a number by Mozart, Glück, Landi, Berlioz, Rameau, Rossini, Schönberg, Händel, Messiaen, Verdi, Wagner and Puccini.
Since the start of his career in London he has directed nearly 40 world premieres establishing a large repertoire of contemporary music theater works and operas of by composers as varied as Theo Loevendie, Guus Janssen, Jonathan Harvey, Hans Werner Henze, Tan Dun, Param Vir, Kaija
Saariaho, Alexander Knaifel, Pascal Dusapin, Louis Andriessen and Wolfgang Rihm.
As guest director, he has worked for, among others, the Bavarian State Opera, Sweden’s Drottningholm Court Theatre, Salzburg Festival, Paris Opera, Théâtre des Champs-Elysées, Theater an der Wien, La Monnaie in Brussels, Teatro Dell’Opera Di Roma, Metropolitan Opera New York, Vienna State Opera, English National Opera, Ruhrtriennale and Los Angeles Opera.
Recent productions include the world premiere staging of Schoenberg’s Gurre-Lieder for DNO, Aus Licht in Amsterdam (2019), a ten-hour staging of K. Stockhausen’s Licht, a cycle of seven operas, Bach’s St. John’s Passion in Brussels and a new Tristan und Isolde at the Théâtre des Champs- Elysées in Paris (also in Rome and Amsterdam) as well as a new production of Wagner’s Parsifal in Munich.
In October 2016, his production of Rossini’s Guillaume Tell was shown at the MET in New York. He made his debut in 2018 at La Scala in Milan with the world premiere of Fin de Partie by G Kurtag.
His numerous awards include the Leslie Boosey Award for his contribution to British Musical Life,
Medal of Honour, Drottninholm Sweden, the Prize of Holland’s Theater Critics, the Prins Bernhard Cultuurfonds Theater Prize and the Amsterdam Cultural Business Award. He became in 2009 the first recipient of the Johannes Vermeer Award. He was knighted in the Order of the Dutch Lion in 2000 and was made Chevalier de la Légion d’Honneur a few years later. For his work for Holland Festival Pierre received the Silver Medal of the City of Amsterdam. He is appointed Honorary Fellow Music Theatre at University of Amsterdam 2014 – 2016. Dutch National Opera was awarded the International Opera Award for Company of the Year 2016.
To mark his departure from Dutch National Opera he received from the hand of King Willem Alexander the Gold Medal of Honour for Arts and Sciences of the