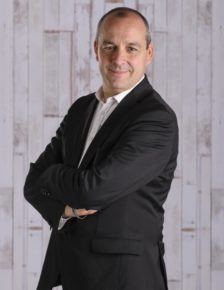 
Laurent Berger was born on 27 October 1968 in Guérande, Loire-Atlantique, France. Son of a child care assistant and a shipyard worker.

Holder of a Master’s degree in History, he was the General Secretary of the Young Christian Workers (JOC) during two years, then he taught history and geography before joining an association dedicated to the occupational integration assistance for adults. Elected as the staff representative, he created a CFDT union branch.

In 1996, he became a full-time representative of Saint-Nazaire’s CFDT local union. He was in charge of employment issues and involvement of young people in the CFDT.

In 2003, he was elected as the General Secretary of the CFDT’s Regional Union of Pays de la Loire and became a member of the CFDT’s National Board.

In 2009, he was elected to the CFDT’s Executive Committee. He was in charge of VSBs-SMEs and of the 2010 CFDT’s Congress Resolution.

In 2012, as the CFDT’s Deputy General Secretary, he took, at a national level, the responsibility for employment issues, security for career paths and occupational integration as well as the negotiations about unemployment insurance, youth employment and coordination for workers demands.

He has been elected President of the European Trade Union Confederation in May 2019.