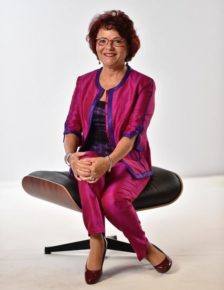 
In 1990, Essma Ben Hamida, returned home after a successful career as an international journalist and co-launched, the first and leading microfinance institution in Tunisia, Enda Tamweel  (380 000 active borrowers, 62%women). In 2018, she resigned as CEO of Enda Tamweel and serves as its board member. She is also chairperson of the NGO, Enda inter-arabe, which is offering entrepreneurial training, coaching and education to excluded micro-entrepreneurs specially youth and women.

Essma holds a university degree in geography and history and one post-graduate year in urban planning (Créteil University, Paris).  Prior to her career in microfinance, Essma worked as a journalist/reporter in Tunisia, New York, Rome and Geneva and as a consultant for the United Nations. She received several awards, including the distinction of “Outstanding Social Entrepreneur in the Middle East and North Africa” by the prestigious Schwab Foundation and the World Economic Forum (Marrakech 2010) and the “The most influential » women on Tunisia’s economy, by the Women Entrepreneurs of Tunisia 2016.