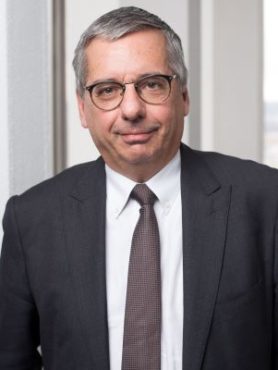 Pascal Imbert is co-founder and current CEO of Wavestone.

A graduate of École Polytechnique and Télécom ParisTech, he began his career in IT and telecommunications services companies such as Télésystèmes (from 1980) and Cirel Systems (from 1988), where he held the position of Deputy CEO.

In 1990, he founded Solucom, an information systems consulting firm with Michel Dancoisne. The company continued to grow and expanded its scope of expertise by combining IT and management skills. In 2016, following the merger with Kurt Salmon’s European activities, Solucom became Wavestone.

Today, Wavestone employs more than 3,000 people across 8 countries. It is a leading European player in independent consulting, and number one in France and among the Top 5 GPTW in France since 2015. The firm offers its clients its unique capabilities combining sectoral expertise, knowledge of companies’ functions and technological know-how.

In 2017, Pascal Imbert was listed in Le Top des PDG France (The Top CEOs in France) by Glassdoor (an independent site collecting employee opinions). He was the number one French CEO and third in the overall ranking.

In addition, Pascal Imbert was Chairman of MiddleNext, an organisation representing mid-cap companies listed in France, from May 2010 to June 2014, and still sits on the Board of Directors.

Pascal Imbert has been an independent director of Axway since April 2011.