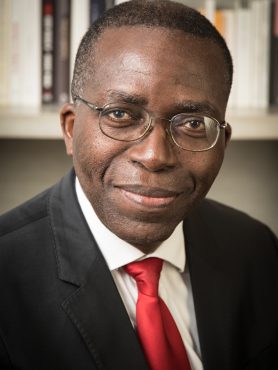 With a postgraduate degree in development economics, Matata Ponyo Mapon was initially a senior civil servant specialized in budgetary and monetary matters.

In 2010 he became Minister of Finance before being appointed Prime Minister two years later by President Joseph Kabila.

During his time in office, until December 2016, the Democratic Republic of Congo (DRC) experienced a strong upswing of its economy: debt cancellation with the IMF, monetary stability, controlled inflation and an average annual GDP growth rate of 7% (among the 10 best performing economies in the world). The country’s poverty rate has gone down from 80% to 63.4% and expenditure on education has increased from 1% to 16% of the state budget. Many infrastructure programs have also been launched: roads and transport, energy, agriculture, etc. In 2015, the DRC was among the 10 countries that carried out the most reforms in the world according to the World Bank’s Doing Business ranking.

Matata Ponyo Mapon is currently President of Congo Challenge and of the Mapon Foundation.

Established in 2017, Congo Challenge is a think tank and consulting firm specializing in governance and economic development in the Democratic Republic of Congo. The Mapon Foundation carries out actions in favor of education and health.