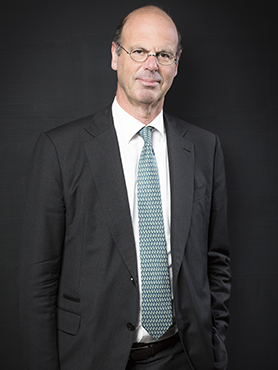 Eric Lombard is Chairman of Europ Assistance since June 2015 and advisor to the CEO of Generali.

Eric Lombard chairs the Ecofin committee of Insurance Europe. The director of BPI France, a French bank since December 2014.

Eric Lombard was Chairman and CEO of Generali France and also member of the Group Management Committee of Generali Assicurazioni from October 2013 to May 2017.

From 1981 to 1989, Eric Lombard held various positions at BNP Paribas, in Indonesia and in France (Export Finance department, CFO department).

Eric Lombard returned to BNP Paribas in April 1993, as Head of Mergers & Acquisitions for the Banking and Insurance sectors. He was then appointed Head of the Financial Institutions Group from 1997 to 2002. In September 2002 he became Head Of Corporate and Financial Institutions within the Investment Banking division.

He has been CEO of BNP Paribas Cardif (the life and casualty insurance arm of BNP Paribas) between 2004 and 2013, and member of the Executive Committee of BNP PARIBAS between 2011 and 2013.

Are Inequalities Compatible With Prosperity?