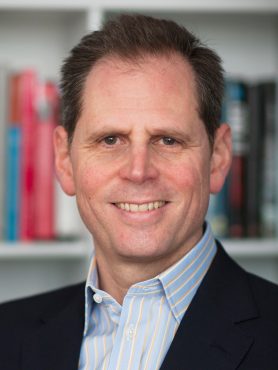 Eric Beinhocker is the Executive Director of the Institute for New Economic Thinking at the Oxford Martin School, University of Oxford. INET Oxford is a research center devoted to applying leading-edge interdisciplinary approaches to economic theory and public policy practice. INET Oxford researchers are working on issues ranging from financial system stability, to innovation and growth, economic inequality, and environmental sustainability. At Oxford Beinhocker is also a Senior Research Fellow at the Blavatnik School of Government and a Supernumerary Fellow in Economics at Oriel College. He is also an External Professor at the Santa Fe Institute and a Visiting Professor of Economics and Public Policy at Central European University in Budapest.

Prior to joining Oxford, Beinhocker had an 18 year career at McKinsey & Company where he was a partner and held leadership roles in McKinsey’s Strategy Practice, its Climate Change and Sustainability Practice, and the McKinsey Global Institute. Beinhocker writes frequently on economic, business, and public policy issues and his work has appeared in the Financial Times, Bloomberg, The Times, the Guardian, The Atlantic, Newsweek, Democracy, and he is the author The Origin of Wealth: The Radical Remaking of Economics and What it Means for Business and Society.

The Origin of Wealth: Evolution, Complexity, and the Radical Remaking of Economics, June 2006, Harvard Business School Press and Random House.

Is It Time For A Social Europe?