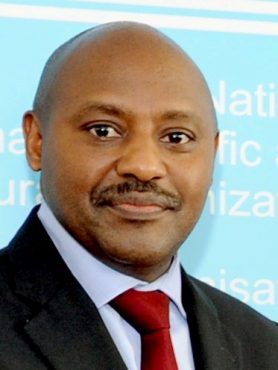 He is also Ambassador of the Republic of Rwanda to Spain, Italy, Portugal and Monaco.

He is the Personal Representative of the President of the Republic of Rwanda to La Francophonie and Permanent Delegate of Rwanda to the following international organizations: UNESCO, UNWTO, IFAD, WFP and FAO. He currently chairs the African Group of UNESCO.

Born on 30th August 1960 in Bukavu, Democratic Republic of Congo (DR Congo) with Rwandan nationality, he graduated in Law at the University of Burundi in 1984. He obtained a postgraduate degree in Tax Sciences at ICHEC (Business School) in Brussels in 1990, and several certificates such as the Certificate in Human rights from the Canadian Human Rights Foundation in Montréal in 1997.

He began his professional career as Legal Counsel from 1985 to 1989. He was appointed to the European Commission, where he served as a Legal Expert within the Directorate of Customs Union and indirect Taxation from 1991 to 1992. He was part of a group of the seven experts appointed within the Directorate for the Fight against drugs from 1992 to 1995, created for the purpose of setting up a European drugs and drugs addiction agency (EMCDDA) whose headquarters was later established in Lisbon, Portugal. Back to Rwanda, he was appointed Director in the Rwandan Ministry of Gender and Family Promotion and National Coordinator of the Law revision project from 1995 to 2000. He then became Legal Adviser in the Ministry of Finance and Economic Planning from 2000 to 2001.

He was appointed Member of the Legal and Constitutional Commission, whose mission was to elaborate, upon consultations with citizens, the Constitution of Rwanda from 2001 to 2003. He worked as a Consultant to the Ministry of Finance and Economic Planning, UNICEF and UNDP in 2004 and SIPAAS (Support to the International Partnership Against Aids in Africa) from 2004 to 2005.

He joined the African Development Bank (AfDB) as a Personal Assistant to the President from 2005 to 2008 and as Principal Adviser of the AfDB Human Resources Department from 2008 to 2010.

He was appointed Ambassador Extraordinary and Plenipotentiary accredited to Paris, a position he holds up to date.

Besides his career, Jacques KABALE NYANGEZI is a founding member of the Promotion Centre for Human Rights (PCHR), Member of the advisory Committee of Association for defense of the Woman and Child’s Rights “HAGURUKA” which means” Stand Up “.