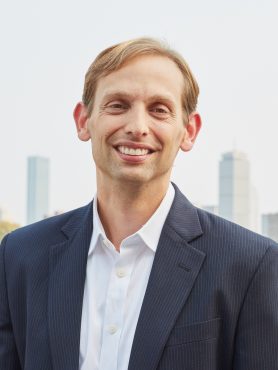 David Berry joined Flagship in 2005 where he focuses on innovating, entrepreneuring, and investing in new ventures in life sciences and sustainability. He is a founder of Flagship portfolio companies Seres Therapeutics (NASDAQ: MCRB), Pronutria Biosciences, Joule Unlimited, Eleven Biotherapeutics (NASDAQ: EBIO), LS9 (acquired by Renewable Energy Group), Evelo, and and Indigo.  David has served as founding CEO of Joule, Pronutria and Seres.  He currently serves on the boards of Eleven, Pronutria and Avedro.  He was previously a Board member of CGI Pharmaceuticals (acquired by Gilead), Joule, Seres and Symbiota.

Prior to Flagship, David received an MD from Harvard Medical School and a PhD from the MIT Biological Engineering Division, working in the laboratories of Professors Ram Sasisekharan and Bob Langer, completing the dual degree in just over 5 years.

David currently serves on the Leadership Council of the United Nations Sustainable Development Solutions Network.  He is currently on the Boards of the Hackley School and the Juventas New Music Ensemble, and has served on the MIT Corporation, its Board of Trustees as well as the Boston Philharmonic Orchestra.

David was elected a 2014 Young Global Leader by the World Economic Forum.  Previously, David was named the Innovator of the Year by Technology Review, and received the prestigious Lemelson-MIT Student Prize for invention and innovation.  He was also selected by the US State Department as 1 of 12 Innovators Helping to Reshape Reality.

How to Benefit from the Demographic Constraint ?