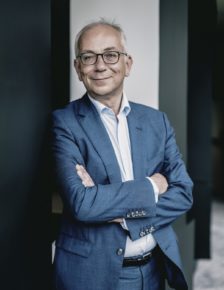 
Julien Carmona is a graduate of the Ecole normale supérieure de la rue d'Ulm and the Ecole Nationale d'Administration (Marc Bloch class of 1995-1997). He is also an agrégé in history. In 1997, Julien Carmona joined the Finance Inspectorate. He then joined BNP Paribas in 2001, before being appointed economic advisor to the President of the Republic in 2004. In 2007, he became a member of the Management Board and Chief Financial Officer of Groupe Caisse d'Épargne (now BPCE), a position he held throughout the financial crisis. In 2009, he was recruited by SCOR SE as Deputy Chief Executive Officer and Chief Operating Officer. He then joined Nexity in January 2014, as Deputy CEO in charge of finance, strategy and digital. He became Deputy CEO in 2017, and corporate officer of Nexity in 2018. Julien Carmona joined Crédit Mutuel Arkéa, as Chairman, in June 2021.