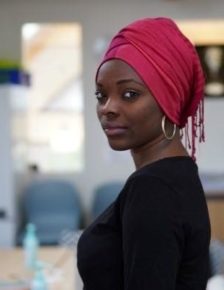 
Hadja Idrissa Bah is now 22 years old. She campaigns for effective support for all victims of GBV through "Aafiya", a structure she created with young people from all over the world, which today represents a universal cause.

She was president of the children's parliament of Guinea at the age of 15, and founded the club of young girls leaders of Guinea in 2016. This latter structure militates in the field against discrimination against children, especially those related to gender: female circumcision, forced and/or early marriages, early pregnancies, rape, the de-schooling of girls and the mistreatment of young girls, etc.

Hadja Idy, who began her activism at a very young age, from the age of 13, has made the defense of abused young girls her battle horse and does not bend before any misogynistic or even patriarchal obstacle. She is accompanied in particular by the brigade of the office of the gender, the childhood and the morals (OPROGEM).

She is now a member of the Board of Directors of Equipop, an NGO that works to advance the health and rights of women and girls around the world. With the NGO, she is involved in social and political mobilization for the rights and health of girls, particularly on issues of gender-based violence and female genital mutilation. She participated in the podcast "Excision: mobilized for abandonment" and was an ambassador for the network of young feminists in French-speaking West Africa, which is supported by Equipop. Political mobilization that she pursues with Equipop before the Equality Generation Forum to bring the voice of youth and feminists in West Africa. Hadja is also a columnist for RFI radio.

Hope is allowed and everything suggests that the law studies begun by the young activist in Paris will allow her to go as far as possible in what has always been her fight: the defense of the rights of young girls in Guinea and Africa.