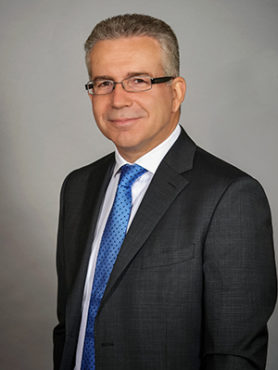 Philippe Setbon is the CEO of Groupama Asset Management since July 2013.

Other mandates within Groupama: Chairman of the Board of Groupama Epargne Salariale (Long-term Savings Solutions); Administrator of Groupama AM SGR SpA (Italy).

He is also the Vice-President of the Association Française de Gestion (AFG) [French Asset Management Association] since May 2017.

Philippe Setbon started his career in 1990 at Barclays Bank (Paris) as Financial Analyst on the unlisted securities market. From 1993 to 2003, he joined AZUR-GMF Group where he managed European equities then became Head of Asset management. He became CEO of the Asset Management Company, Boissy Gestion.

In 2003, he worked for Rothschild and Cie Gestion as Head of Equity Portfolios Management (OPCVM and institutional clients).

Philippe Setbon holds a post-graduate degree (DESS) in Finance from the University of Paris-Dauphine and is a graduate from the SFAF [French Company of Financial Analyst].