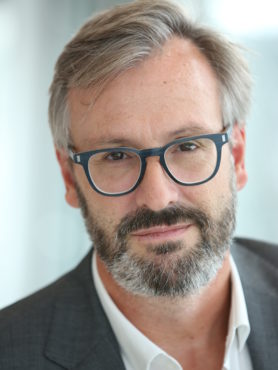 Olivier Girard is CEO of Accenture for France and Benelux since the 1st of September 2018. He leads the company’s Executive Committee and Accenture’s operations in the region while retaining the role of global account lead for one of the world’s leading retailers.

He was previously Senior Managing Director of Accenture’s Products Operating Group in France and Benelux (which serves clients in a wide range of industries, including automotive, consumer goods, retail and pharmaceuticals) and member of the company’s Executive Committee for this region. He also led Accenture’s Retail Industry Group in the region from 2001 to 2015. He remains the global account lead for one of the world’s leading retailers, a role that he has since 2005.

During his career at Accenture, which he joined in 1997, Olivier Girard has developed a recognized expertise in management consulting, in supporting clients drive growth and create value, particularly through innovation. The retail sector continues to be an exceptional field of investigation. The notions of supply, pricing, volumes, operations or the importance of detail in execution is primary, and allow point-of-sale innovation to take multiple forms.

Passionate, proud to take part in the technological revolution and the human adventure that is Accenture and its 459 000 collaborators, he has helped some of the biggest international companies to transform themselves so that they are « the disruptors and not the disrupted ones » of current and future digital revolutions

.
Olivier Girard believes deeply in the power of expertise and considers that his vocation, like that of all Accenture employees, is to anticipate and decrypt technological innovations to translate them into uses and economic results for his clients.
Under his leadership, Products has grown significantly in the region, driven by his ability to manage his teams, his vision, his understanding of the issues specific to each of his customers and the priority given to innovate in the heart of each project – a challenge and a daily motivation.

Olivier Girard understands that Accenture’s teams contribute every day to transforming businesses, society and, on a larger scale, the world by using the power of new technologies in the best and most responsible way.
Olivier Girard holds an MBA from HEC Montréal and a degree from INSA Strasbourg (Former National School of Arts and Industries of Strasbourg – ENSAIS)