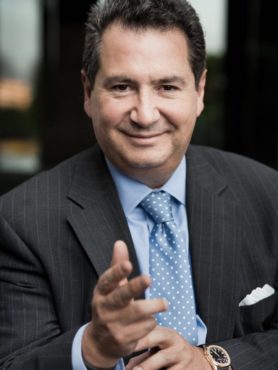 Majored in Sociology and Mastered in Political Sociology at Provenza University, in France. Doctored in Geography and History with a Degree in Contemporary History at Valencia University, in Spain. His professional work includes three fields: scientific research, the chair and journalism.

In the scientific and academic fields is titular researcher B at UNAM and National Researcher at SNI. He is the author of 9 books, co-author of 40 more and has authored over 70 scientific articles published in journals specialized. His latest published book is “Orgullo y prejuicios. Reputación e imagen de México”. Among the imprints that have published his work are prestigious universities such as California, Pittsburgh, Pennsylvania, Valencia, UNAM, UAM, Australian National University, Oxford University Press, Brookings Institution among others.

He is currently the host of the news program « Así amanece » in ADN 40, and of « Leonardo Curzio en Formula », as well as the program « Incursionando » in the Canal del Congreso. He is a member of the Advisory Council and columnist of El Universal. It’s commentator political analysis program of channel Once, Primer Plano. It has been awarded by the President of Italy with the « Prix Italia nel Mondo 2007 » and Líderes Mexicanos magazine recognized his career and placed him among the 300 most influential leaders Mexico.