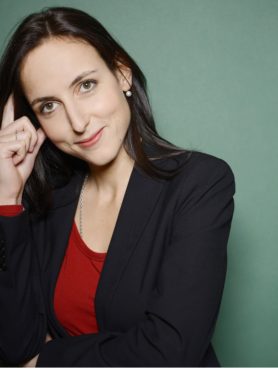 Julia Cagé is an Assistant Professor of Economics at Sciences Po Paris, a Research Affiliate at the Center for Economic Policy Research (CEPR), and the co-director of the Laboratory for Interdisciplinary Evaluation of Public Policies’s “Evaluation of Democracy” research group. She is a Board member of the Agence France Presse.

She completed her PhD at Harvard University in 2014. Her research interests focus on political economy, industrial organization, and economic history. Her work has been published in leading journals in Economics, including the Journal of International Economics, the American Economic Journal, the European Economic Review, and Explorations in Economic History, as well as in several handbook chapters.

She is particularly interested in media economics, political participation and political attitudes, and has already authored two books on the subject: Saving the Media. Capitalism, Crowdfunding and Democracy, Paris, Le Seuil, 2015, translated in eleven different languages, and L’Information à tout prix (with N. Hervé and M.-L. Viaud, INA, 2017). Saving the Media was awarded the Special Jury Prize for Best Book on Media of the 2016 edition of the “Prix des Assises du Journalisme”. In 2018, she published Le prix de la démocratie (Fayard; English edition forthcoming in 2019, HUP) in which she scrutinizes contemporary democracy and proposes radical new solutions for political funding. This book was awarded a “Prix Ethique” by Anticor. In 2019, she was nominated for the best French young economist award (Le Monde / Le Cercle des Economistes).