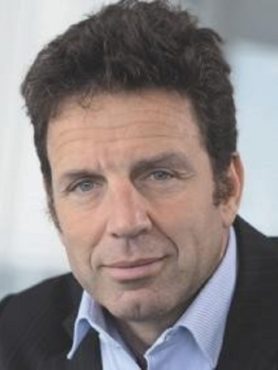 Geoffroy Roux de Bézieux was born on 1962 and  is  the father of 4 children. He is  married to  Sabine, a consultant.

Career: MBA from  ESSEC (1984) and Master in international business from P a r i s – Dauphine  University. He  enrolled in the  F r e n c h  Special  Forces with whom  he  was  active  in Africa and  Lebanon 84/85). Today  he  is  a  reserve  Frigate Captain.   He then   joined  the L’OREAL group for  10 years   where he performed numerous duties in France and abroad, particularly as marketing director  in England, then Managing Director in Poland. In 1996 he  founded THE PHONE HOUSE, the  first  chain  of shops  entirely dedicated to mobile  phones. In 1997 the  English company CARPHONE WAREHOUSE became a majority shareholder and he took the company to 250 stores and 250M€ turn-over. This group was listed in London in

In 2004  he  founded and chaired  OMEA  TELECOM, the  first  alternative  mobile operator (MVNO) in France. In 2006 OMEA  launched the  brand VIRGIN MOBILE, and  the  Virgin Group and  Carphone warehouse became shareholders. 2008 OMEA acquired Télé 2 mobile. In 2014 OMEA TELECOM had

In July 2018, he was elected as President of the French Business Confederation (MEDEF)