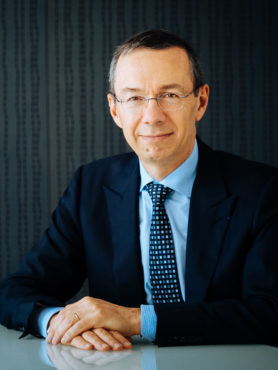 Eric Labaye is President of École Polytechnique, a major French institution of higher education and research in sciences and engineering. He is also leading the creation of Institut Polytechnique de Paris, an alliance between École Polytechnique, ENSTA ParisTech, ENSAE ParisTech, Télécom ParisTech and Télécom SudParis. He is a member of the board of Telecom Paris Tech, the International Advisory Board of ESSEC, and the Board of Advisors of the School of Public Affairs at Sciences Po.
In his previous role, Eric Labaye was Senior Partner at McKinsey & Company and Chairman of the McKinsey Global Institute (MGI), its business & economic research arm. Prior to this, he was Managing Director of the France office and led the firm’s Global Knowledge and Communications function, as a member of the Global Operating Committee. He was also a member of the Shareholders Council of the firm (its Global Board) for ten years, of which he chaired the Client Committee.
At McKinsey, Eric Labaye worked extensively for clients globally in the Telecom, High-tech and industrial sectors, and also for governments and public institutions on a variety of strategic and operational issues including major transformation programs, growth and R&D topics, development of agile organizations, acquisitions, post-merger management, and digitization.
He conducted many research projects with MGI and in France on key economic topics, including growth in Europe, productivity, digitalization, future of work and inequality. Eric Labaye also initiated and co-led McKinsey’s “Women Matter” research program, which, since 2007, aims to promote gender diversity in large companies’ senior management. He was a member of the Commission “Release Growth in France”, from 2007 to 2010, and a member of the French National Economic Commission from 2005 to 2014.
Eric Labaye is a graduate from École Polytechnique and Telecom ParisTech and holds an MBA with distinction (Henry Ford II award) from INSEAD.