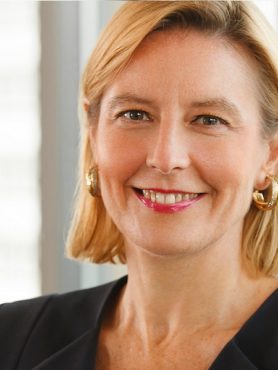 Béatrice Guillaume-Grabisch is Executive Vice President, Head of Human Resources and Business Services since January 1, 2019. She is based in Nestlé Headquarters in Vevey, Switzerland. Prior to this role, she served as Chief Executive Officer Nestlé Germany from July 2015 until December 2018, and as Vice President Zone Europe, Middle East and North Africa from July 2013 until June 2015.

Ms. Guillaume-Grabisch began her professional career in 1985 with Colgate-Palmolive in Paris, France. She then moved to Beiersdorf in Hamburg in 1989, where she assumed international responsibility for various product ranges. From 1995 to 2000, she held various roles at Johnson & Johnson Consumer in Düsseldorf.

From 2000 to 2006, Ms. Guillaume-Grabisch worked for L’Oréal, as Managing Director L’Oréal Paris in Germany, and as Managing Director of the Consumer Division for Switzerland, based in Geneva. From May 2006 to April 2010, she served as President of Germany Business Unit at The Coca-Cola Company. In May 2010, she became CEO of Beverage Partners Worldwide, the global ready-to-drink tea beverages joint venture between The Coca-Cola Company and Nestlé S.A.