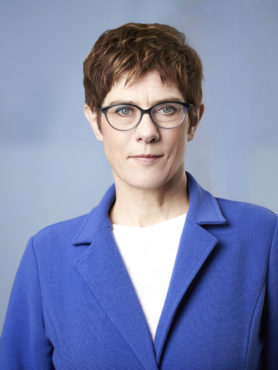 Annegret Kramp-Karrenbauer is the Chairwoman of the CDU Germany since December 2018 and former Prime Minister of Saarland.

After studying politics and law, she started her professional career at the CDU Saar and was voluntarily active in local politics. From 1999 until 2018 she was a Member of the Landtag (Parliament) in Saarland. She was the parliamentary manager of the CDU faction before she became Minister of Interior in 2000 – the first female Interior Minister of a federal state in the history of Germany. In the following years she also was Minister of Labour, Education, Science, Family and Culture. In 2011 she was elected as Prime Minister of Saarland.

After two consecutive election victories as Prime Minister, she was elected as Secretary-General of the CDU Germany in February 2018.