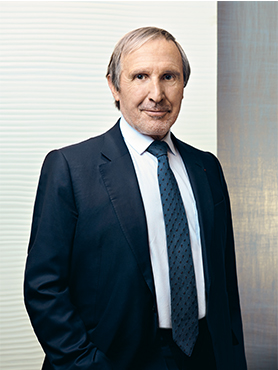 Alain Taravella, an HEC graduate, is an entrepreneur in the property sector. He is the Chairman and Founder of Altarea Cogedim, a developer of shopping centres and all-round player in the property sector, which is helping to design the city of the future by offering urban solutions within cities. In 1975, he joined the Brémond Group, which became Pierre & Vacances, where he served as Chief Executive Officer from 1985. In 1994, he created Altarea, a property player developing shopping centres. The company went public in 2004, and in 2007 bought Cogedim, a residential and office property developer. Since then, Altarea Cogedim has been expanding across three main property markets: retail, residential and offices. Alain Taravella created the concept of combining retail and leisure with Bercy Village (Paris 12th arrondissement), renewed the areas surrounding roads into cities with Family Village®, and developed new-generation, mixed-use urban projects. The leading owner developer in French Gateway cities, Altarea Cogedim now employs more than 1,900 employees, all employee shareholders of the Group. Operating in France, Spain and Italy, Altarea Cogedim has 37 shopping centres in its portfolio. It is also the leading corporate owner developer in the Paris region, and one of the top three developers in France, with more than 11,000 reserved residential units at 31 December 2018.