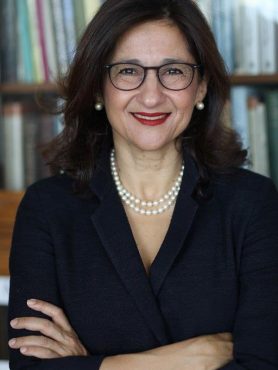 Dame Minouche Shafik is a leading economist, whose career has straddled public policy and academia. She was appointed Director of the London School of Economics and Political Science as of  September 2017.

She trained as an economist, studying at the University of Massachusetts-Amherst, the LSE and the University of Oxford and by the age of 36, she had become the youngest ever Vice President of the World Bank. She later served as the Permanent Secretary of the Department for International Development from 2008 to 2011, Deputy Managing Director of the International Monetary Fund and as Deputy Governor of the Bank of England from 2014-2017, where she was responsible for a balance sheet of over £500 billion.

Minouche currently serves as a Trustee of the British Museum, the Council of the Institute for Fiscal Studies and is Honorary Fellow of St. Antony’s College Oxford. She was made a Dame Commander of the British Empire in the Queen’s New Year’s Honours list in 2015.